There is one more roof to put on the studio. Three of the four roof lines (one of which is the 'dome') have been previously completed.  I needed to complete the bond beam for this room, before the roof work can begin.  The bond beam supports and distributes the roof beam load and ties the wall together with the roof structure. 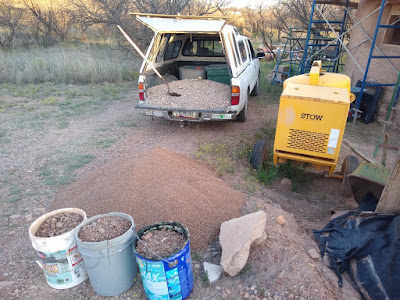 Concrete is a mixture of Portland Cement, sand, gravel and water.  I have a dry-wash on my property so I am able to provide for my own sand right on site.  I sifted the sand with a fine screen into a wheel barrow and piled by the mixer.

The gravel was obtained from another dry-wash in the nearby mountains (see back of truck in photograph).  Gravel size ranged from about 1-1/2" down to pea-size. 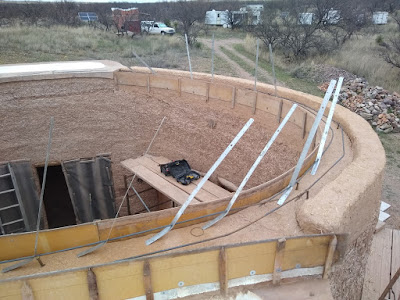 The bond beam sits on top of the the adobe wall.  I call it a "footing in the sky".  Due to the curved nature of my walls, I couldn't just use masonry 'bond-beam' block [which is similar to a common cinder-block but rather has a "U-shaped" channel on top where you can lay-in rebar, then fill the hollow block with concrete - stacked side-by-side to form monolithic beam].

So I came up with the idea to purchases several sheets of 'Masonite board' to create the form which is flexible and would conform with the curved-shape of the wall.  The Masonite was cut into 16"-wide strips for this purpose.

Notice in the right-side of the photograph (above) that I was able to build-up the cob (clay-straw) wall to act as a form on one side.  The wall is about 18"-thick at this location, so 12"-wide of that will be the concrete bond beam.  Thus from the outside of the building, you will only see the cob wall (about 6-inches of thickness of cob).

The photograph above is a section detail of how the bond-beam form was fabricated  For this part of the wall there was the masonite form on each side. Notice the short vertical wood stakes I used to support the form. The stakes are fixed to the wall by 4"-5" deck screws.  What was an amazing discovery about cob is that you can screw into it and it holds firm!

There is two rows of 1/2"-dia rebar laid horizontally, wire-wrapped to vertical rebar that extended-up through the wall.  This locks the bond beam to the wall.  The dimensions of the bond beam are roughly 12"-wide by 5"-high.  The section of bond beam poured for this project was 35-feet in length.

Notice the metal 'straps' in the picture.  They have a hole toward the end so the rebar can go through to secure the strap embedded in the concrete.  The metal strap will extend-out about 2-feet from the top of the bond beam and will eventually secure the roof beams.   Thus that completes the securing of the roof to the bond beam which is secured to the wall.

One further thing to note. Notice in the bottom-foreground of the photo you can see white foam.  I placed the foam there to act as a spacer to extend the bond beam width out over the top of the wall to create a "lip". That is because this portion of the wall separates two rooms with the room in the foreground (white top of roof in photo foreground), from the higher large room roof.  So the 'lip' on the outside will allow eventual flashing to protect the weather-side exposed wall from underneath the lip down to the top of the lower roof of that room.

NOTE; THIS FLASHING SOLUTION WILL BE COVERED IN A SEPARATE POSTING 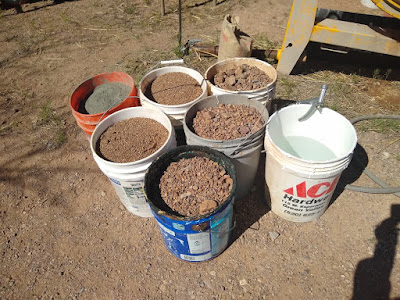 A standard concrete mix for structural applications is roughly 1-part Portand Cement, 2-parts sand and 3-parts gravel, with about 1/2-bucket of water (see photo above).  However, after the first mixer load, I observed the mix to be too 'rocky' and didn't produce a smooth 'workable' surface. I realized the sand I was getting from my wash was more like tiny gravel than fine sand.  Therefore I changed the mix to 3-parts sand, reducing the gravel down to 2-parts from 3-parts.  That worked better. 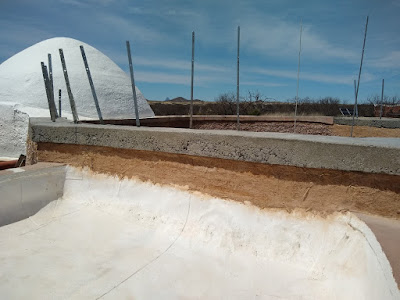 I hired a helper to assist with the pour.  I mixed the concrete in a mixer than used 5-gallon buckets to haul the concrete up the scaffolding to the worker on top who would empty the bucket into the form and ensure the concrete was uniformly spread and leveled on top.   I only filled each bucket 1/3-full due to the weight of hand-carrying up scaffolding. The whole process took 3-1/2 hours to pour 35-feet of wall with a mixer and the two of us.  I used five 47-lb bags of Portland Cement and associated aggregate as discussed to  complete the bond beam  I calculated using an online concrete calculator, that 35' x 1' x 0.5' of form equals about 0.65 yards of concrete.

Note that the Masonite, screws, washers, and wood support stakes are all saved for future use.