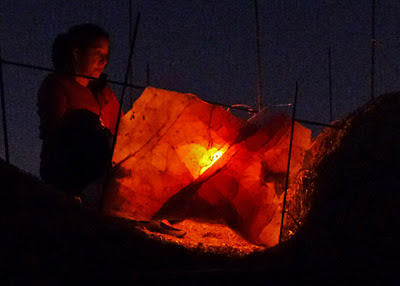 CLICK ON ANY PHOTO TO ENLARGE
I became obsessed with translucent nature honey-amber colored Honeycomb Calcite after seeing it at the Tucson Gem Show in Tucson back in 1999.  So much in fact, that I formed a entity to sell the stone after developing a business relationship with the owners of the calcite mine. I saw the potential of the stone as an artistic architectural element in the adobe buildings I was designing for the future at that time.  The future has arrived as the building projects are moving forward. 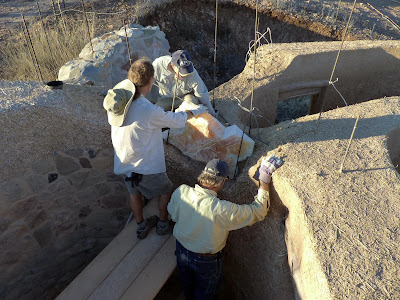 As envisioned for the studio building project, I took the largest stone I had in my calcite inventory and spent several days removing the white outer layer of the stone with chisels and a grinder.  Then with the help of two friends, raised the 197-lb stone up scaffolding to the position where it was placed on the north side of the circular 'kiva room'.  To hold the stone in position, rebar was employed as bracing using protrusions in the stone as handles for the rebar to rest against. 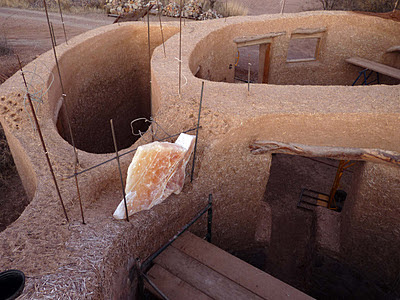 The thickness of the wall at this location is approximately 3-feet, thus the stone will not be illuminated by sunlight.  Instead, a solar-powered lighting system will be installed in a wall cavity behind the stone in order to illuminate its features for viewing inside in the kiva room.  Future posts will show additional building steps for both the wall and the lighting installation.
Posted by Blogs of Bart Santello at 1/06/2012 02:57:00 PM

Love that honeycomb calcite! this is going to be so beautiful! Well it already is! You have done so much work on this place and it is really coming together. I hope to see you one of these days when you are in Arivaca. I am living here full time now but don't get out much. Would love to have breakfast with you guys sometime at Sweet Peas. this project is really looking good. you should be VERY proud:) Message me on FB and i will give you my number.