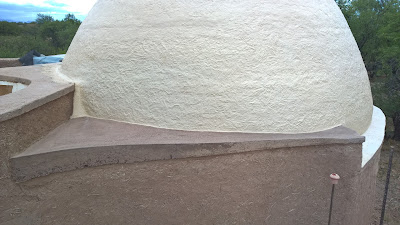 The photo above is the completed 'landing' made with site-mixed poured concrete.  I added brown coloring to the mix to give the concrete a conforming tone.

The first step to creating a 'landing' was fabricating a rebar pattern to help re-enforce the concrete and secure it to the top of the wall.  Additionally, just below the rebar you will see where I added a strip of one-half inch thick styrofoam, as the first step to building a form to retain the concrete .  The Styrofoam in the form, acts as a spacer that when completed will create a 'lip' extending the concrete over the wall 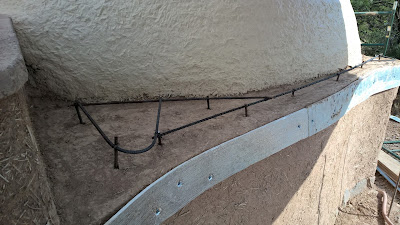 The photo below shows how the form fabricated to retain the concrete was added using Masonite, wood stakes and 4"-deck screws.  I've been reusing Masonite forms made from 4'x8' sheets, cut into 14"-wide strips.  The wood stakes with two deck screws each - drilled into the cob wall - is amazingly strong.  This is the form method I devised for bond beams and top-caps poured along this curved building. 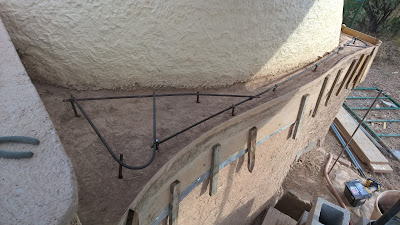 Approximately 300-pounds of concrete made up of Portland cement, sand and gravel, along with brown concrete color was mixed 'on-site' for the pour.  Not quite visible on top is a channel that was contoured during the work to direct water from the sides of landing, inwards; toward the channel, so that channel can then drain any water out to the west side of the structure. 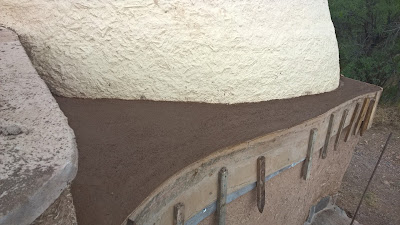 The narrow (neck) of the landing along the west wall makes a sharp curve, so i used more of the wood stakes to wrap around, thus extending the form as necessary (photo below). 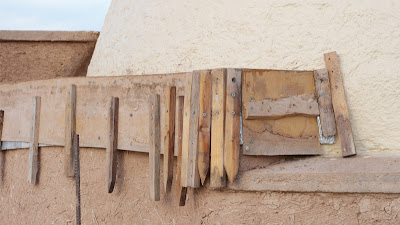