I didn't decide ahead of time on the look of the ceiling for the large room.  Like most of the decisions during the construction of the 'Studio', I figured it out when I got there.

When I did 'get there', I came across what I thought would be a good aesthetic material at a reasonable cost - Barn board.

Originally, I had considered small (2"-dia) pine poles for the latilla's on top of the beams, but I couldn't justify the premium expense for the poles and was willing to see what other options would eventually make themselves known.

A few weeks back during my search for vigas I came across a reclaimed lumber company in Mesa, Arizona - "Old Sol Lumber Company".  They suggested barn board obtained from old barns as dismantled in Kansas.  Looking at their stock, I really liked the texture of the old wood and the fact it had a history.

From a practical standpoint, I knew I could obtain the needed 300 sq.ft. from this supplier in one shot and thus would save time. 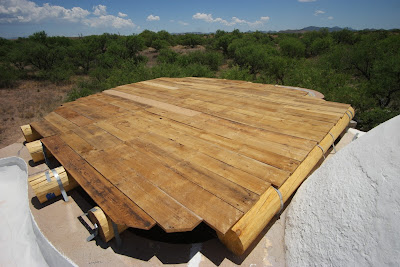 Before I picked the barn-board solution my wife had suggested making the ceiling of old doors.  I really thought that it was a good idea, but finding suitable doors would be a more involved search for the style and quantity needed for the ceiling.  Another consideration was time because I'm trying to get most of the roof system in place before the monsoon season that begins here in southern Arizona around early July.  Note that the final roof structure probably won't get completed until after the monsoon season in the fall.

Ultimately the choice of Ponderosa Pine vigas along with the barn-board ceiling will present an appropriate and aesthetically suitable compliment to the studio's overall design. The vigas provide an historical building context - traceable to Anasazi construction methods (see below).  The reclaimed barn board will have the effect of being brought-back in time. 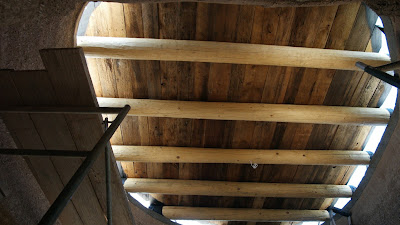 The photo below was taken at the magnificently constructed Anasazi structures in Chaco Canyon (NW New Mexico) built around 1100 AD.  The Anasazi used pine vigas hauled from the forests by hand 20+ miles from Chaco.  This is the Studio's connection to ancient architecture of the Americas. 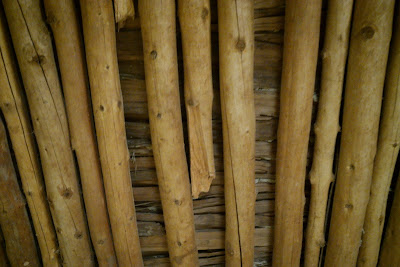 NOTE: This posting is just the start of the large room roof's structure.  I will update this blog to detail each step of the roof's construction.