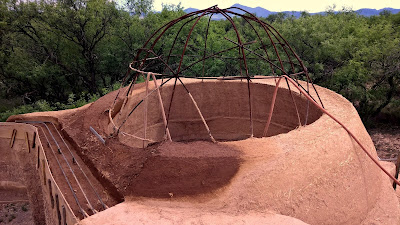 The 2-inches of rain so far kicking off the monsoon season here in southern Arizona has barely put a scratch on the progress of the cob dome.  Work makes slow progress in the summer due to unpredictable thunder-showers, heat, mosquitoes and mud.

The photo above shows preparation for a 'bond-beam' pour for the wall making up the room to the east of the dome (not shown).  The photo shows the rebar in the trench where the concrete beam will be poured.  Note the 'form-in-the-sky' shown to the left in the photo, has a strip of flexible 'Masonite' board as the left side of the trench.  The Masonite is held in place by wood - short 1"x2" (wood stakes) and 4"-deck screws.  The cob holds these long course-threaded screw really tight.  So much so that it's going to be retaining the concrete as it's poured in the form.

Once the bond-beam is poured.  I'll be able to use it as a working platform for the east side of the dome construction.