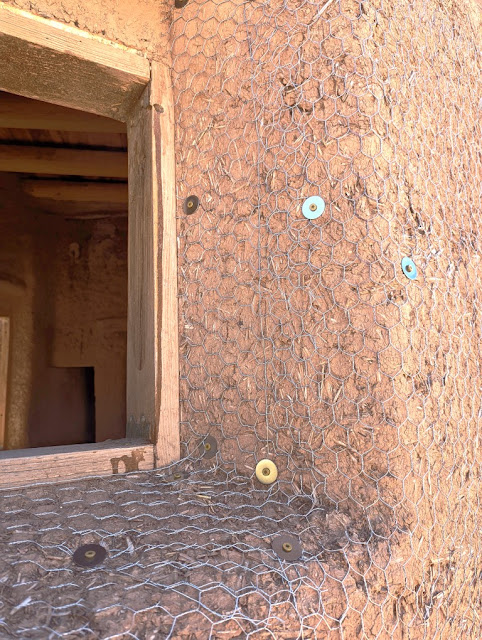 As the summer rain season approaches here in Southern Arizona (usually around the beginning of July), the goal is to get plaster on the exterior of the studio now that the structural work on the building has been completed.

Over the years on other adobe buildings that have been constructed, I have observed that the daily 40-50 degree-F temperature rise and fall in this region cause the plaster material to expand as temperatures rise, and contract as temperatures fall. This is known as thermal expansion or thermal contraction.

What results is that this daily expanding and contracting of the plaster tends to work itself off the adobe wall over time.  The South and West walls get substantial sun, and thus I have observed that those sun facing walls have demonstrated the majority of failed plaster.

With regard to plaster for the Studio, in order to prevent or at least drastically reduce the occurrence of failed plaster due to thermal expansion, I decided to wrap the entire exterior of the Studio in chicken wire which will have the effect of providing additional grip and support of the plaster on the wall.

Adding chicken wire to an adobe structure and where the walls are curved, provides a challenge to fasten the wire to the wall.  On a wood or cement board building, the wire would normally be fastened with heavy duty staples or equivalent.

In the case of an earthen building like the studio, another 'fastening' approach was required since you can't use a staple gun on cob.  The solution I employed was to use 3-inch deck screws and 1-1/2"-diameter washers to both grab the wire and securely adhere it to the cob wall (see photos below).

The next step is the actual plastering.  Now the plaster can be applied to the wall with confidence that future maintenance will be reduced as a result of the wire mesh wrapping. 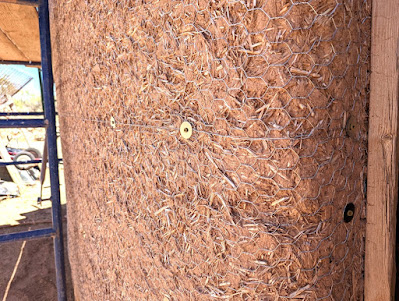 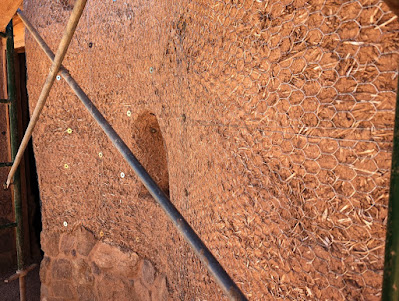