Spillway For Water Off Dome


Each of the four rooms of this studio have their own custom roof.   One aspect of thinking about what a robust roof system for this structure would look like was thinking how each of the four roof lines would interface with each other - especially in relation to water drainage.  For the 'round room' a dome was built.  I always knew in the back of my mind that I would eventually have to figure-out how to channel water coming-off the dome since to its East was the largest room of the structure that would need a roof of its own.

Since this studio is being built without plans, my mantra has always been: "I'll figure it out when I get there".  Well I finally 'got-there'.  This blog post is how I addressed the challenge. 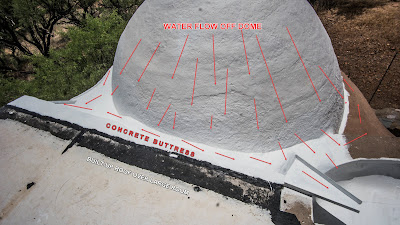 CLICK ON ANY IMAGE TO ENLARGE
Overview: I decided to form a north-south concrete buttress up against the Ponderosa Pine beam (Viga) that was placed at the west end of the large room (see a few posts back for the placing of the roof beams).   I also used concrete to sculpt spillways to direct water in both North and South directions coming off the dome.  The photo above shows arrows generally illustrating the intended water flow direction per my approach. 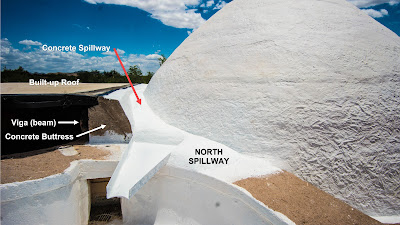 The photo above provides more detail - almost a 'cut-away' view of sorts to illustrate.  The spillway is below the height of the buttress wall to keep flowing water in the channel.  NOTE: The built-up roof over the large room is not completed.  The entire wall of the structure still needs to be built-up with cob (clay/straw) around the entire room.

The final wall height will be above the roof line to the top of the parapet.  This work will be done in the fall after the rainy season.  At that time also the roof will need to properly sloped for drainage and waterproofed.  These processes (yet undetermined) will be discussed from this point forward in future posts. 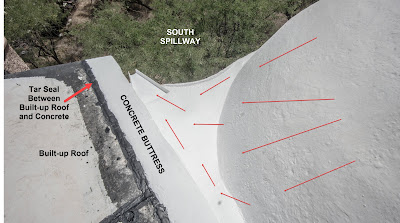 The South buttress and spillway is shown above.  The water drains-off the building.  Since the landscape slopes from North to South, the water draining off here will help water trees in the Mesquite Bosque south of the structure.

Notice the line of tar shown in the photo above.  That is the joint between the built-up roof and the concrete buttress.  That joint needed to be sealed so water would bot be able to enter the living space.  Eventually, a concrete parapet wall will be build on top of this gap and properly sealed to hopefully eliminate that leak potential for the long-term.
Posted by Blogs of Bart Santello at 7/03/2020 02:42:00 PM