The next step in the completion steps for the roof over the large room was to build-up the exterior cob wall to the height of the roof line.  As you can see in the first two photos below, the ceiling and sub-roof was built in top of the Ponderosa Pine vigas (beams).  The vigas rest on the concrete bond beam that rings the exterior wall.

On the left side of both photos you can see the cobbing to the roof line completed from the east wall (1st Photo), working its way along and into the north wall (2nd photo).

The picture below shows a completed section along the east wall about 18" high and between 12" and 20" in width.  This represents a massive about of cob. 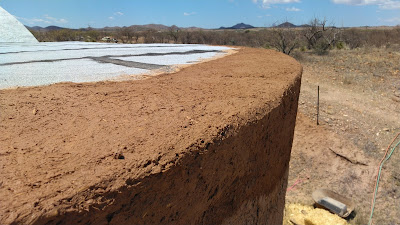 The photograph below shows a completed and nicely sculpted north wall section of cob. 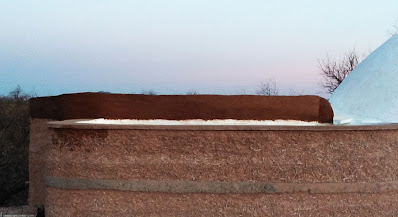 The view in the photograph below shows the completed east wall viewing top down.  You can see the rolled-roofing employed to keep the ceiling and sub-roof protected from rain until the final roof structure can be completed.

This 'final' roof structure will be discussed here in future posts.  The design of which is still being conceptualized, but in general will consist of a cob parapet wall, additional insulation, sculpted light-weight concrete and final rubberized / elastomeric coatings will all be integrated into the solution. 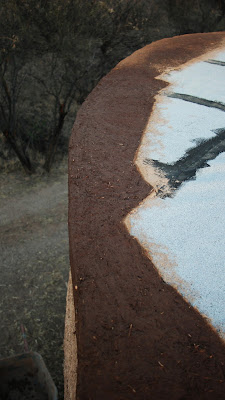 It was estimated that 2-tons of wet cob was hauled up scaffolding to complete the work shown in this post. And as far as the final completion of this large-room roof is concerned, there is still a lot of work to do to complete.  Stay tuned.